Inflammatory bowel disease (IBD) is a collective reference to autoimmune inflammatory diseases of the gastro-intestinal system, including, among others, ulcerative colitis (UC) and Crohn’s disease (CD). IBD causes inflammation and sores on the lining of the digestive tract. Ulcerative colitis affects the large intestine (colon) and rectum, while Crohn’s disease can affect the entire lining of the digestive tract.

IBD affects over 2.5 million people across the United States and Europe. The IBD market is estimated to be over $8.0 billion in annual sales in 2017.

Treatment of IBD usually begins with the use of anti-inflammatory medications, which include corticosteroids and aminosalicylates. As the severity of the disease increases and patients no longer have adequate responses to these drugs, they are treated with biologics. The most common class of biologics for the treatment of IBD are tumor necrosis factor (TNF)-alpha inhibitors (anti-TNF), which modulate the immune response. However, between 25% and 45% of those patients lose response to TNF alpha inhibitors due to its immunogenicity – the formation of antibodies to these agents which are mostly neutralizing. Additionally, there are black box safety precautions for the prescription of TNF alpha inhibitors, which include infections and malignancy.

OPRX-106 is a plant cell-expressed recombinant human tumor necrosis factor receptor II fused to an IgG1 Fc domain (TNFRII-Fc), for inhibiting TNF alpha. It is in development for oral administration. When administered orally and while passing through the digestive tract, the plant cells function as a natural delivery vehicle, having the unique attribute of a cellulose cell wall which makes them resistant to degradation compared to proteins produced via mammalian cell expression.
Through oral administration, OPRX-106 is designed to work locally in the gut, avoiding the systemic exposure that occurs when TNF alpha inhibitors are administered by injection or intravenous infusion. Oral administration may potentially lead to a safer to use anti-TNF.

OPRX 106 may also be less immunogenic which can potentially result in longer term efficacy.

We believe that our oral delivery mechanism can potentially prove to be a safer and more convenient method of protein administration and could be applied to additional proteins in certain indications.

A total of 24 patients were enrolled in the study; 18 patients completed the study with 6 patients who did not complete the study.  The dropout rate is consistent with other trials in similar patient populations, and none of the patients dropped out due to a side effect or serious adverse event.  Patients were randomized to receive 2 mg or 8 mg of OPRX-106, administered orally, once daily, for 8 weeks.  The average baseline Mayo score was 7.1 (from a scale of 0-12) and the average baseline mucosal endoscopy sub score was 2.1 (from a scale of 0-3).  For the 18 patients who completed the study, 89% had a baseline Mayo score between 6 and 9, which meets the criteria of moderate disease activity, and 84% had a baseline mucosal endoscopy sub score of 2 and above indicating moderate to severe disease based on mucosal appearance. 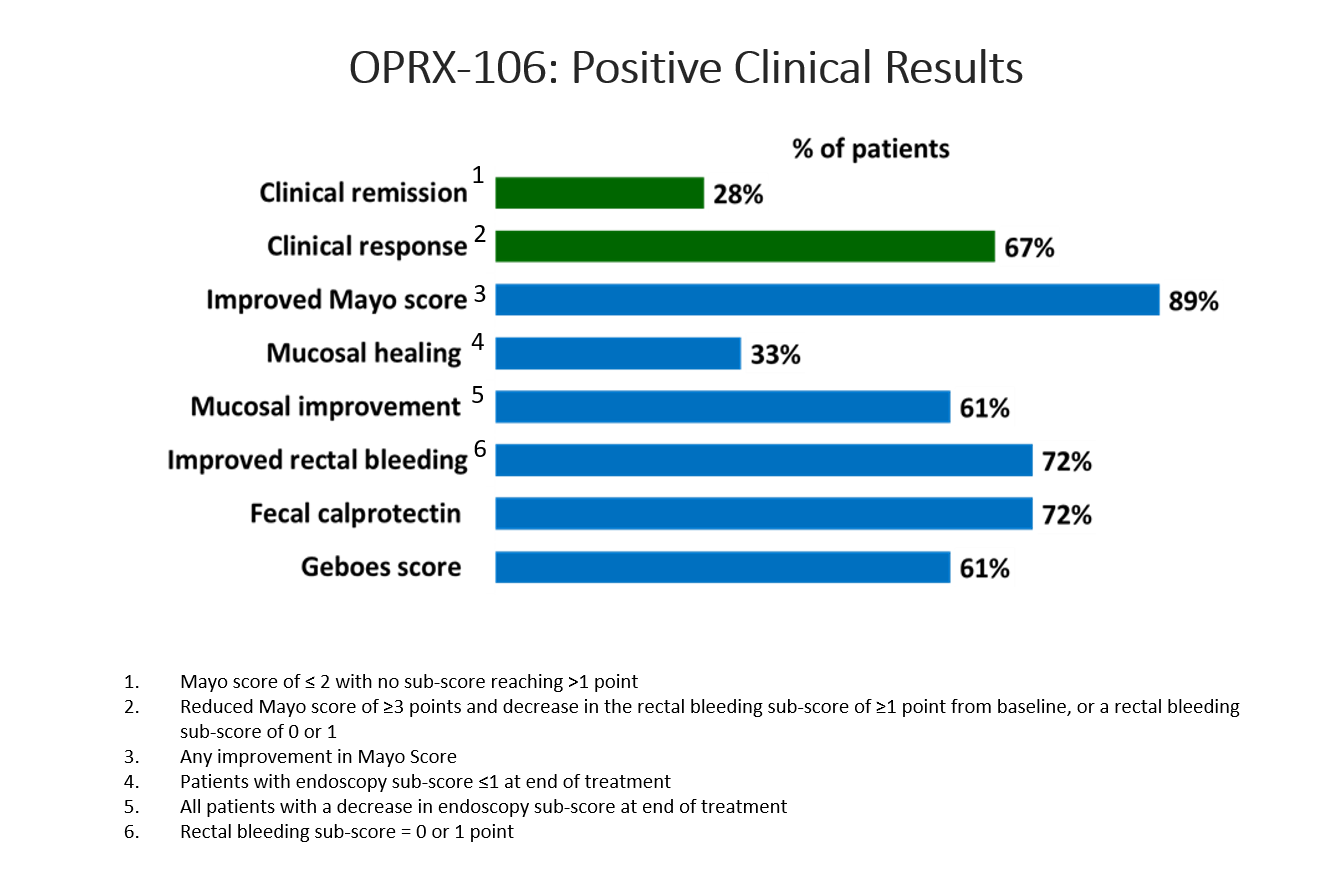 The key efficacy endpoints of the study following 8 weeks treatment were met:

In addition to clinical response and remission, efficacy was also observed in mucosal healing, an important prognostic parameter in ulcerative colitis and other inflammatory bowel diseases, measured by endoscopy:

This positive trend in efficacy was consistent in substantially all patients. This trend is demonstrated by 89% of the patients having showed an improvement in Mayo score in both doses, with an average decrease in Mayo score of 46% at week 8 in the 8mg dose and 40% in the 2mg dose.  In addition, all of the patients also showed an improvement in at least one of the other efficacy parameters.

No anti-drug antibodies were detected.

No systemic absorption was evident.

OPRX-106 was safe and well tolerated with only mild to moderate adverse events, which were transient in nature. Headaches were the most common adverse event reported.